Bordighera town and Dolceacqua, in the footsteps of Monet

“Everything is admirable, and every day the countryside is more beautiful. I am bewitched by this land.

Everything here is beauty and the weather is superb”, wrote Claude Monet in 1884 to his friend and Parisian art dealer Durand-Ruel.

Monet lived in Bordighera town between 18 January and 3 April, staying at the “Pension Anglaise” for 79 days. In less than three months, Monet managed to find inspiration and leave an indelible mark along the Riviera dei Fiori, made eternal by the canvases on which the artist painted Bordighera town and then Dolceacqua, the medieval village that he faithfully reported in his writings:

“We had a wonderful excursion. We left by carriage early in the morning and reached an extraordinarily picturesque village in the Nervia Valley. Intending to return to Bordighera town on foot along a hilly route… unfortunately I will never be able to recount the marvels I saw on the way back through my paintings because of the difficulties I would have to face in order to return there to paint.”

In this regard, Monet was wrong because shortly afterwards he would paint the painting ‘The Bridge and the Castle‘, one of the most celebrated paintings in the history of Impressionism.

Retracing Monet’s journey, you will be struck by one thing in particular: that world that had captured his genius and his art, has not changed. Bordighera town has remained the same, as has Dolceacqua, despite the passage of time. One example is the Giardino Moreno in Bordighera town, defined by Monet as “phantasmagorical” as “all the plants of the universe seem to grow there spontaneously”.

This is also the case of the “pinus canariensis”, the tallest in Europe, which after all this time is still partially visible between Via Romana and Via Tumiati, along the Beodo path, in today’s Monet Gardens. The artist got to know many figures including Moreno, an oil trader as well as a consular agent of France who had become friends with the artist and whom Monet described as: “definitely an adorable man… I came back laden with flowers, oranges, tangerines, sweet lemons that are delicious to eat”. In Bordighera town, Monet was enraptured by the “blue sea”, the exotic palm trees and the lush vegetation, about which he said: “I would like to make orange and lemon trees that stand out against the blue sea, I can’t find them the way I want them”.

During those 79 days, Monet produced 38 paintings, painting Via Romana and the old town from the top of the Torre dei Mostaccini and the Vallone del Sasso. The other four were painted in Dolceacqua, which he reached for the first time by carriage on a cold morning of 17 February 1884 in the company of some English gentlemen he met in the guest house where he was staying. 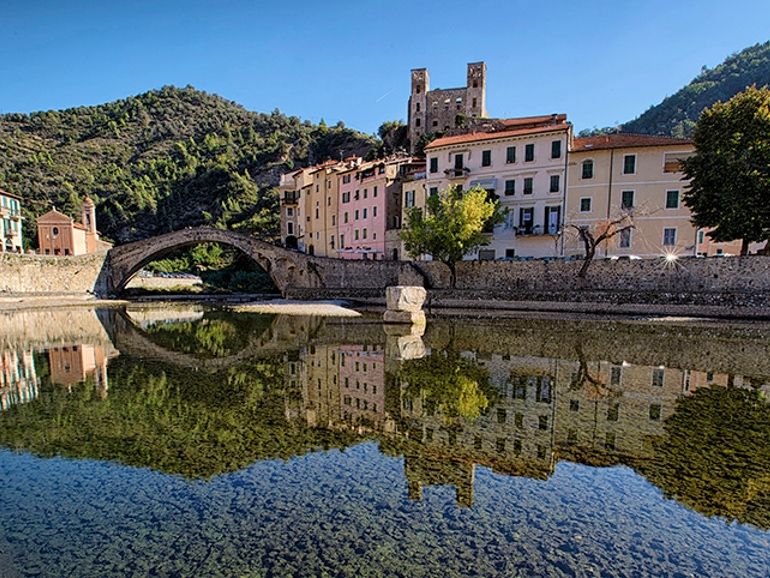